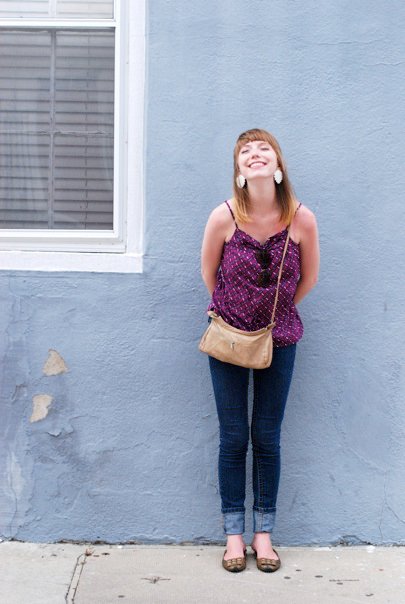 I certainly don't mean to be. Photo by Abby Ott.

Lately I’ve realized that I tell a lot of the bad & the ugly of this summer. But let me just tell you—there has been good.

As I’ve mentioned, this town is adorable, & I still enjoy driving up & down its antique streets, drinking in all of the wood-paneled siding & porches upon porches. I’ll never stop being amused by Soapy, the sidewalk produce salesman who always cuts me a deal & sends me on my way with bubblegum to-go. I’m getting quite used to living alone, & am perfectly content to come home, greeted only by silence. It’s therapeutic, somehow. And I’ve met & heard the stories of some absolutely stellar people, & been shown kindness by many that I could never have expected or asked for.

Example: Just when I’d given up on Mayberry, I found my pearl (see here). Not too long ago, I was bouncing impatiently through a checklist of errands on my way to Charleston for the weekend. Last on the list was to run, lightning speed, through El Cheapo gas station to fill up for the trip. Unfortunately, I was hampered in my pursuit of the cheapest-by-2-very-important-cents gas by heavy traffic & lines at every pump. Unproportionally annoyed, I squealed the sedan into the next nearest station and parked—only to realize, to my horror, that some 17-year-old blondie was making his way, clad in a yellow and black racing striped uniform, to my tank, pump in-hand. The full-service station! Ack!

You might be thinking, what’s the big deal? To which I would answer, excellent question. It was obviously and absolutely not a big deal. But the truth is: I had never been to a full service station. I didn’t even know they still existed until an enlightening conversation I had with a friend about a week before. And how much am I supposed to tip someone for doing a job I can and would normally do myself, with the same end result, and without breaking a sweat? Who knows! Point is, I was flustered. So I grabbed my wallet, flipped the locks, and shut the door.

A solid steel barrier now stood between myself, my keys, & my cell. More curses. In an instant of optimism, I turned to the teeny-bopper & asked if he was equally as skilled at breaking into car windows as he was at filling my tank. Of course, he simply looked at me like the madwoman I am & answered no, in an unsure & slightly scared manner. Drat.

Into the convenience store I went, inwardly punching myself for not memorizing a single local telephone line. Crouching in the candy aisle, I scrambled through a heap of scattered thoughts, waiting for one that was clever. Nothing came to mind. So I made my way to the counter, where I handed my problem to the woman behind it. Shockingly, she had things solved in a few quick words, a short walk outside, & then back in again with another boy & his own car keys.  “He can take you back to your apartment,” She said, jabbing a finger in his general direction. Talk about full service! Within the minute I was in his passenger seat, bopping to Lil’ Wayne & nodding as he talked on about graduation & boot camp to come. Suddenly, we were back at the house, & spare key in-hand I was on my way back to the station. Small town, you’ve officially redeemed yourself.